I turned on my computer this afternoon and was greeted with a lovely (not) BSOD. I've took a photo to show the exact error: 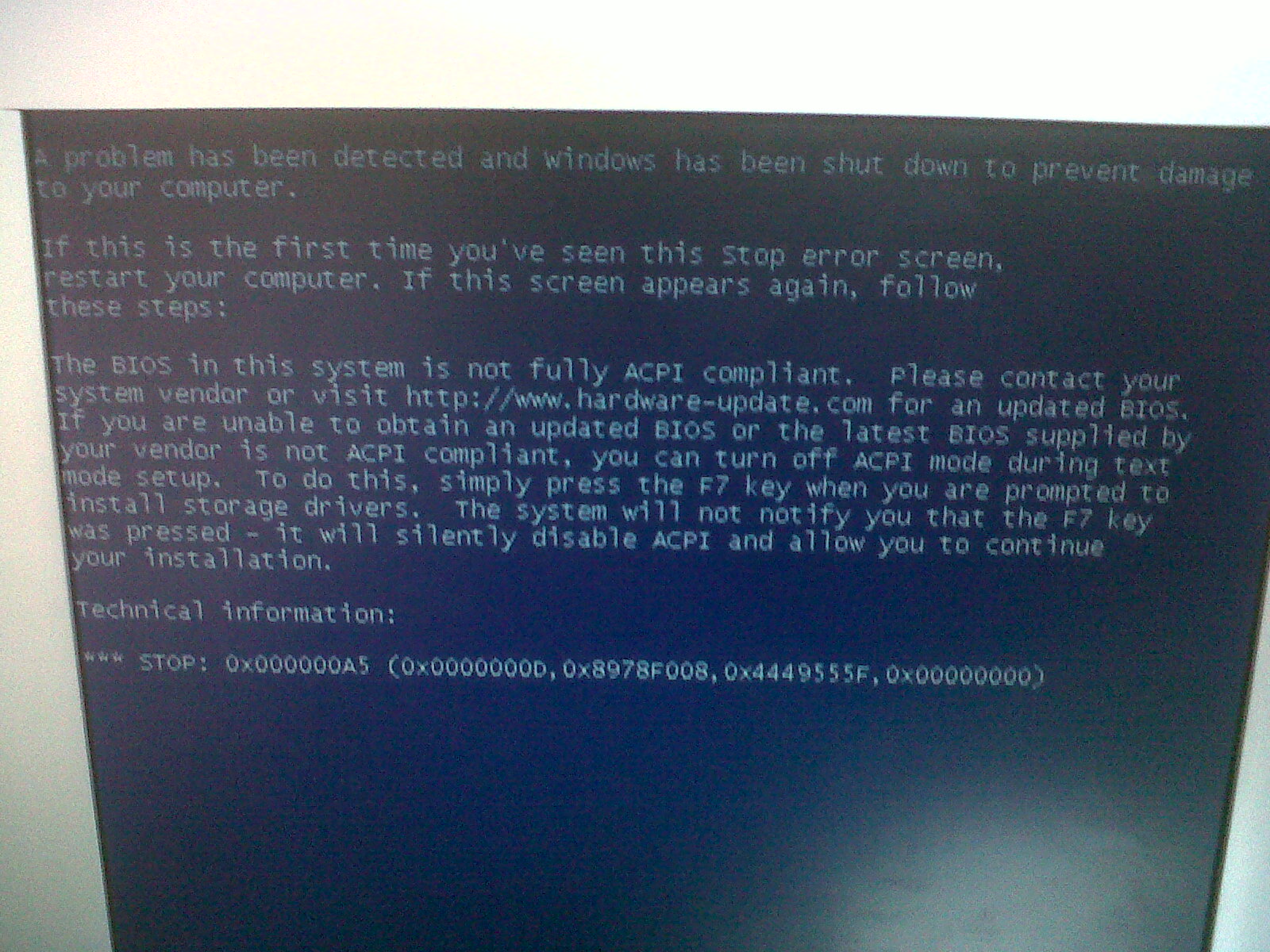 The recent changes I have made is used Acronis True Home Image to restore the C partition from a backup image that I had. Now I have done this numerous times without fail and everything went well. I did the restore 2 nights ago.

I have tried what Microsoft have said here even though the cause that they have mentioned of the problem isn't the case for me as I haven't hibernated since:


Code:
I've tried to boot from the Windows XP CD but as its loading and moves onto the setup, I'm struck with the BSOD again. I've never updated a bios before so if I could get some help that would be awesome :)

Staff member
Normally if you get a BSOD when booting from the XP CD it suggests that the system is missing SATA Drivers.

The only reference I can find to IDE is IDE-0 under 1st Boot device which comes under Advanced CMOS SETUP. It might be worth mentioning that this PC is easily 7-8 years old.

Staff member
And is there an option to change that to AHCI anywhere?

Not that I can see GMan, here is a snapshot of the BIOS: 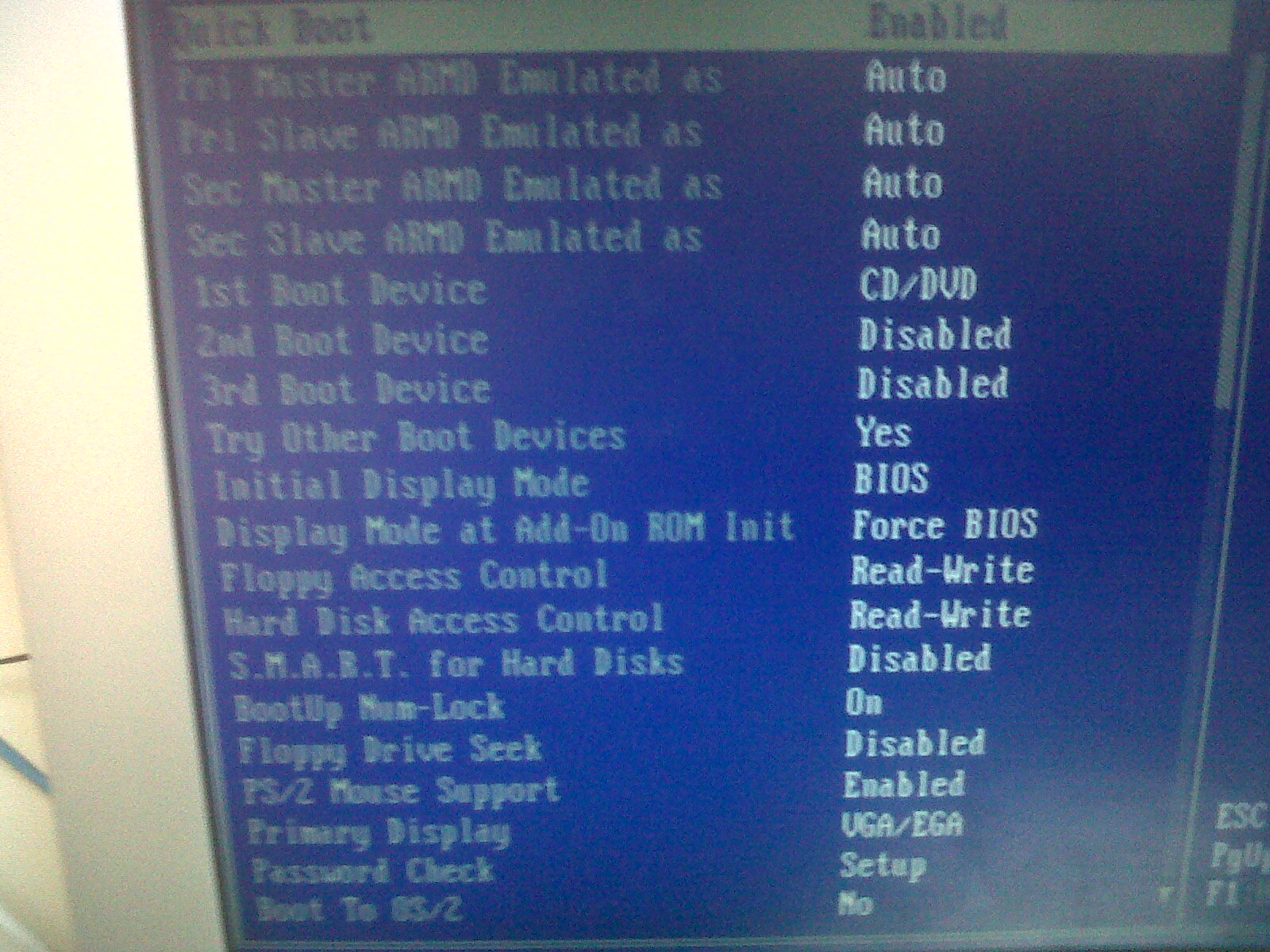 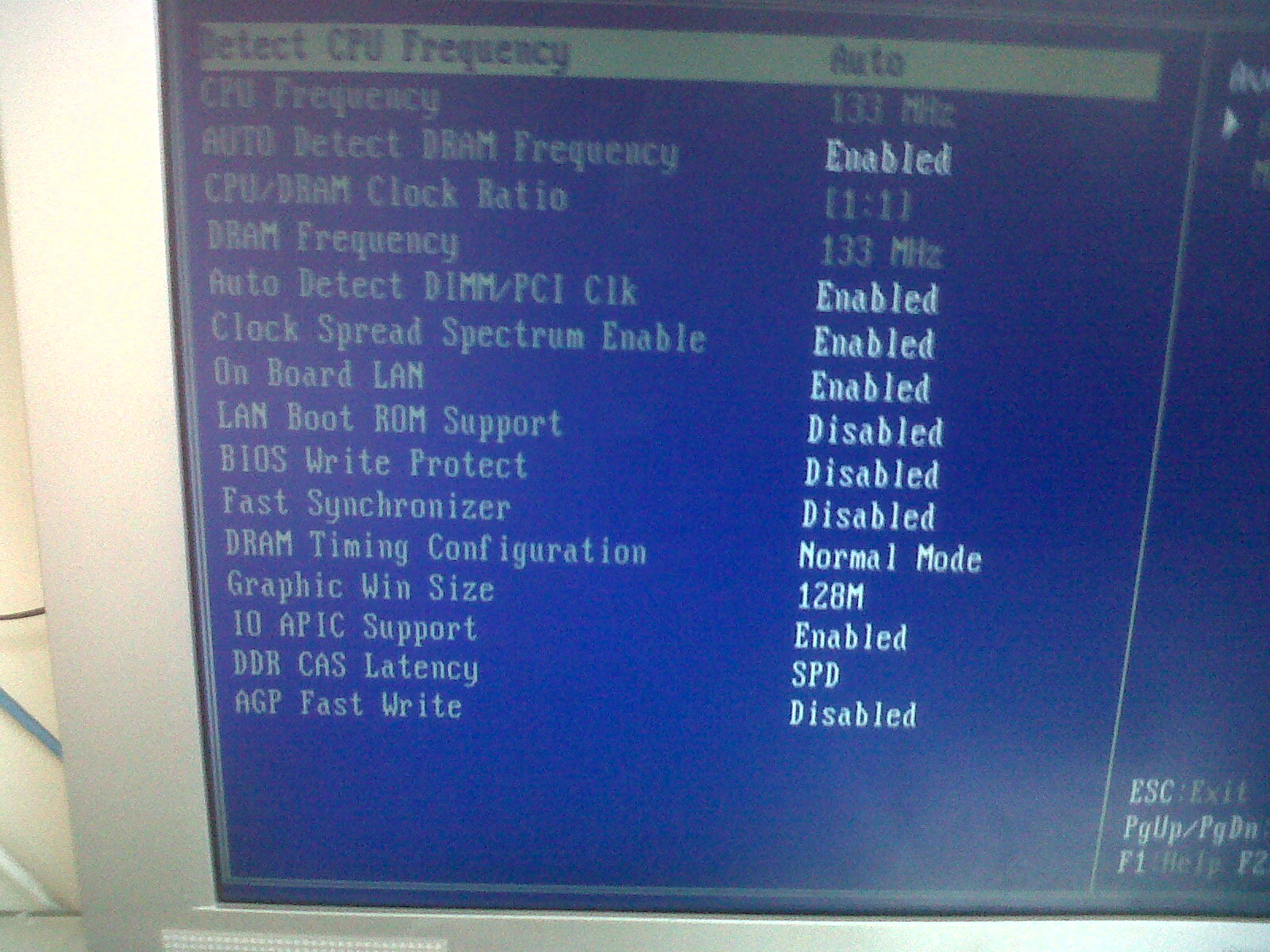 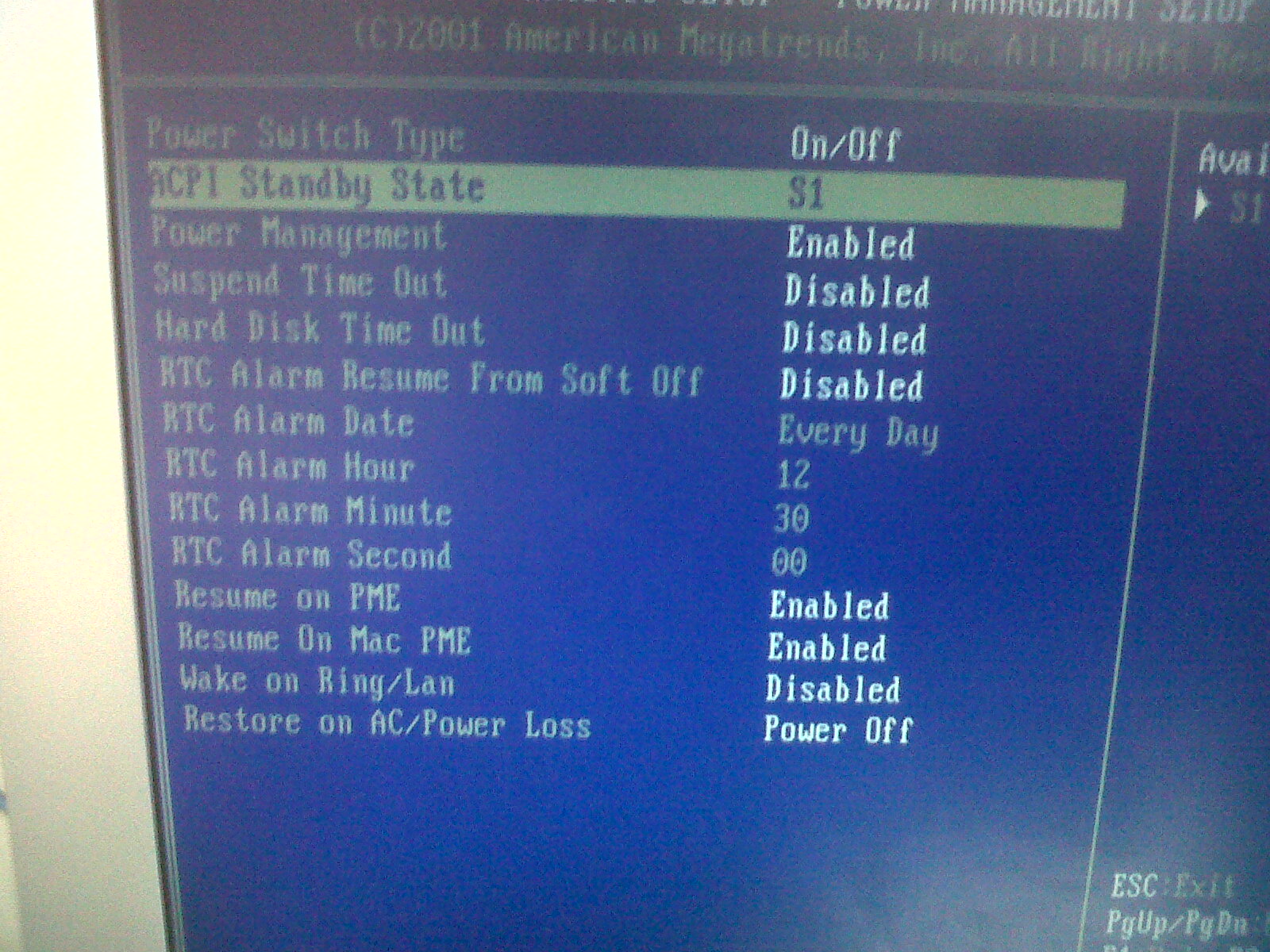 Staff member
Do you have anything else connected when trying to boot such as a USB Ext drive or pen drive?

Gman496 said:
Do you have anything else connected when trying to boot such as a USB Ext drive or pen drive?
Click to expand...

I don't know at this point in time whether I should answer your question or tell you that my PC is now working. lol

I'll answer your question first, no nothing else was connected at the time, I was quite puzzled in the past when my PC would not boot because my external HDD was plugged in.

Now for the good news. I got fed up with my PC so I turned it off. I then thought to myself, what else could I have possibly done. Then I realised, my wireless router has been on for the past 30 days, another recent change I did was turn off the mains last night before going to sleep. So after turning my PC off, I flicked the OFF switch on the back of my PC tower, I then turned the switch ON, turned the PC ON and it booted into Windows. I don't know how, but it now works.:whacko:

Staff member
We all have days like that lol

Acronis is normally on the ball so I was surprised to hear you had issues after restoring an image.


All is well that ends well :p

Gman496 said:
We all have days like that lol

Acronis is normally on the ball so I was surprised to hear you had issues after restoring an image.


All is well that ends well :p
Click to expand...

The joys of computer problems ey Gman. Glad that is over, I had planned on staying indoors to get it fixed, didn't know it would be as easy as flicking a switch. Thanks for your input, appreciate it. :)

I think my computer is punishing me for all these years of usage. I switched the OFF button, took the leads out of the tower. Opened it so I can clean the fans (wanted to get to the GPU's fan), so I cleaned it, put the case back and leads back in, turned the switch to ON, powered on the PC and this time it went to the same BSOD as listed in the first post, tried a few restarts but looks like I just got lucky somehow before and the problem still persists. :(

In my half asleep state I managed to start a re-install of XP instead of a recovery. I then cancelled the setup, went back to it and reformatted the hard drive. Now when I load the PC it says NTDLR is missing. But not to worry, now if I'm not wrong that means that the BIOS is able to atleast see the hard drive and attempt to boot from it. So when I wake up later on I'll attempt to remove and re-insert the CMOS battery and RAM to freshen things up abit, I'll then restore the backup image via acronis and see if it causes me anymore trouble. :)
Last edited: Aug 22, 2012

Might be a stupid suggestion but is it possible the cmos battery is dead or dying,the power surge from when you turned the switch back on may have jumpstarted it

sinno said:
Might be a stupid suggestion but is it possible the cmos battery is dead or dying,the power surge from when you turned the switch back on may have jumpstarted it
Click to expand...

I had the CMOS battery die out on my just a year ago, so the previous one lasted around 5-6 years before I got it replaced. I remember trying to take the CMOS battery out myself before but was unable to do it, thought I was going to accidentally break the clips that it was sitting in, but I will give it a shot tomorrow. I've no option on my BIOS to load setup defaults, so the only option here would be to re-insert the CMOS battery.

And check with the manufacturer for a bios update

So I have an update on the situation.

Sinno, this PC was custom made for me when I bought it. Not entirely custom made per say, all I chose was the case then as I was quite young. lol

So I went ahead and removed the RAM sticks and CMOS battery (finally removed it this time without causing any damage to the motherboard). Booted the computer back-up and both RAM sticks were detected again, BIOS prompted that CMOS battery prompted to press F2 to set BIOS defaults. it also said CMOS battery low, but I don't think its low as it only come up once after turning the PC back on and I only recently got it replaced.

It looks like my only way to get this to work is indeed to update the BIOS, its a do or die situation for me at this point. lol

When my computer boots up, this is what I can see as far as the bios is concerned:

I was able to boot up Acronis and restore the C partition, but essentially I am back to where I was. Also another thing, just recently my PC's floppy disk light flashes and makes 3 beep sounds, waits 2 seconds, and repeats it again. I then have to restart my computer maybe once or even twice for it to boot again. So since I can't boot into Windows, how do I go about doing this? :|

GeForce2 is my graphics card so I'm a little puzzled as to why its showing as my BIOS. I'll try running a linux live CD to try find out the bios version with that.
Last edited: Aug 22, 2012

Scratch that guys, seems like that was information for my GPU. I was able to boot into Safe Mode with command prompt and managed to check through windows system information and can determine that my bios is:

If I click on Bios Updates in American MegaTrends website it takes me to a software that claims to update BIOS itself:


Code:
Another thing, I now have XP running as normal, I won't reboot the computer incase it dies out on me.

Update: A BIOS update was detected, but the program is not a freeware. :whacko:

Update: Don't know if it was the CMOS battery or what but it now appears to be working fine. Since this problem is taking me for a roller coaster of a ride, I'll be leaving it as it is until it messes up on me again. lol lets just hope that is not any time soon.
Last edited: Aug 22, 2012

i used to get some pretty weird problems on my old machine running xp.since i put win 7 in all seems well.dunno what your specs are but mine is an intel celeron d 2.8ghz with 2ghz of ram.i found win7 actually ran a little faster than xp,even when i had only 1ghz of ram.dont know if this is an option for you or not hiccup.
Last edited by a moderator: Aug 22, 2012

Even thou you replaced the cmos battery i bet you never checked the expiry date on the card it came in,it could have been sitting on the shelf for years,its fairly difficult to find the correct bios for custom pcs(as in to get the right 1),if you have your motherboard version and your bios version your half way there to finding 1,on the otherhand as aldan suggested you could goto win7.
Hirens boot may also give you some answers

Windows 7 is probably not a wise option for me. I know aldan you have mentioned it before, but even your old PC is decent. My PC has an Intel Celeron processor running at 1.5Ghz and 1.25GB of RAM. It hardly seems worth going over to Windows 7 as I'm not too fussed about it at this point.

Sinno, I couldn't possibly know the expiry date of the CMOS battery, all I did 8 years ago was go into the computer shop with my relative and say hey I like the case of this, now make me a PC and give me some nice speakers, I then had it delivered by a bunch of guys a week later. lol

At the moment it seems fine, several restarts, powers offs and all is well.

dan-ger-ous said:
At the moment it seems fine, several restarts, powers offs and all is well.
Click to expand...

Is it holding the correct date & time consistently? (especially after restarts)

If it is? the battery is most likely OK.

I meant for the 1 you changed to a while ago and as Gman said about the date and time is a good indicator,must be a huge thing if a bunch of guys delivered it:whistling:
You must log in or register to reply here.
Share:
Facebook Reddit Tumblr WhatsApp Email Link
Menu
Log in
Register
Top