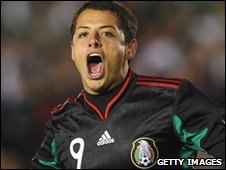 Hernandez has scored four goals in four appearances for Mexico

Manchester United have agreed a deal to sign striker Javier Hernandez from Mexican side Chivas de Guadalajara for an undisclosed fee.

The deal for the 21-year-old, who has scored four goals in four senior international appearances for Mexico, is subject to a work permit.

Personal terms have been agreed and Hernandez passed a medical this week.


Manager Sir Alex Ferguson said: "I am delighted to have reached a deal to sign such an exciting young striker."
He added: "He has been in prolific form for both his club and his country. He will be a great addition to our squad and we look forward to welcoming our first Mexican player in the summer."

The club will submit their work application for Hernandez shortly, with a view to him becoming a United player on 1 July, 2010.

As part of the deal, United have agreed to play a match to open the new 45,000 capacity Chivas Stadium in Guadalajara as part of its 2010-11 season preparations.

Hernandez is United's second capture for next season having reached agreement to sign defender Chris Smalling from Fulham in January.

TK Supporter
Nice one Noely.Dont know much about new guys.Looking good for futureThanks
You must log in or register to reply here.

Odsonne Edouard Not for sale