McGeady Is Not For Sale - Celtic 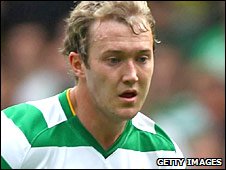 McGeady has 26 caps for the Republic of Ireland

Birmingham boss Alex McLeish has cooled his interest in Aiden McGeady after Celtic said he was not for sale.

The Republic of Ireland winger was among a number of new year transfer targets for the midlands club.

"We made an enquiry but we were told he is not for sale," said McLeish. "The situation won't change until someone says he is up for sale."

McLeish refused to "confirm or deny" whether the club have made an £11m bid for Sunderland striker Kenwyne Jones.

The Blues have been one of the successes of the current Premier League season and are currently unbeaten in 12 matches.

And with owner Carson Yeung providing up to £40m to bolster their prospects of qualifying for Europe next season, McLeish has already made his advances a week after the transfer window opened.


The Scot had a £8m bid for Liverpool striker Ryan Babel turned down on Wednesday but may now switch his attentions to Trinidad and Tobago international Jones.
"We've made enquiries about a lot of people. I don't want to confirm or deny a bid has gone in [for Kenwyne Jones]," said McLeish.


"There is a lot of transfer speculation now and it is not something I like to talk about when nothing has been done.

"We have made enquiries for several players. I am not going to confirm or deny any names."


McLeish is still considering an offer for midfielder Giles Barnes, who has been training with City after he was released by Derby earlier in the season.

"We are going to speak to him tomorrow and see what he is going to do," he added.

"I believe other clubs are interested in having a look at him but we will speak to him tomorrow and see what he wants to do. He is a good player, has got a good idea about the game, a bit of vision."

Staff member
TK Supporter
i'm not his greatest fan, but i think he does a great job for Celtic, i dont think they should get rid of him unless they have a replacement

Thread starter
Heard from a mate in Glasgow earlier that Celtic will accept 10 million for him :dunno:

TBH, I can see him playing in England next season, especially if we dont make it into the Champions League.
You must log in or register to reply here.