Cesc Fabregas out for rest of domestic season 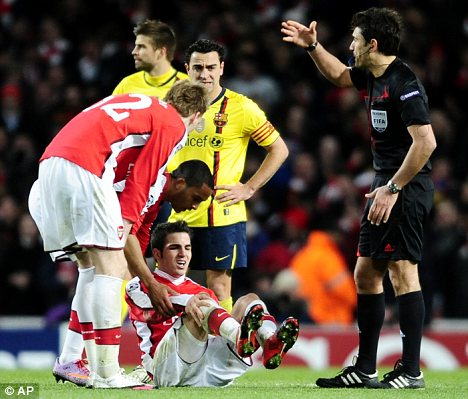 Arsenal captain Cesc Fabregas will miss the rest of the season after cracking his right fibula in Wednesday's 2-2 Champions League draw with Barcelona.

Fabregas picked up the injury when he won a penalty after colliding with Barca centre-back Carles Puyol.

The Spaniard, 22, underwent a scan on Thursday which confirmed he will be out of action for at least six weeks.

Meanwhile, William Gallas and Andrey Arshavin will be out for "at least three weeks" with calf injuries.

"Cesc will miss the remainder of the domestic campaign as he will be out of action for at least six weeks," said an Arsenal statement.

"Everyone at the club wishes Cesc a full and speedy recovery."

Fabregas, who was a doubt before the quarter-final first leg with severe bruising to his knee and leg, was only declared fit to play after the final warm-up.

He was visibly pained after lashing in the equalising spot-kick five minutes from time against his boyhood club and left the Emirates Stadium on crutches.

"When I took the penalty, I was quite strong, but after when I went to get the ball, I could not walk any more," said Fabregas after the match.

The influential midfielder would have been suspended for the return leg in Barcelona after picking up a third booking of the competition.

He now faces a race to be fit for the World Cup, with Spain's first game at the finals in South Africa taking place on 16 June against Switzerland.

The national side has three pre-World Cup friendlies lined up, the first of which is on 29 May against Liechtenstein, before games against South Korea and Poland in early June.

Meanwhile, Arsenal defender Gallas was stretchered off just before half-time and seems likely to miss most of the Gunners' run-in.

Arshavin, too, suffered a calf injury in the first half of the first-leg tie and will be out for three weeks and not the six that was initially feared.

Arsenal manager Arsene Wenger lamented the loss of both players, admitting that he had taken a risk on Gallas, who had missed the last six weeks through injury.

"William had a recurrence of his calf strain. That is at least three weeks," said Wenger. "I took a gamble that didn't pay off. Yes I regret that now. Arshavin has also done his calf. Three weeks."

They are not the only injuries to have hit the Gunners, with both Gael Clichy and Denilson doubtful to face Wolves on Saturday.

"The first three (Fabregas, Arshavin and Gallas) are out, Clichy and Denilson are 'possibles' to play at the weekend."

In better news for Arsenal, striker Robin van Persie is expected to return to full training in two weeks after being sidelined since November with an ankle ligament injury.

Wenger revealed he hopes to "give him some big games to aim for at the end of the season."

Van Persie, who suffered his injury playing for the Netherlands, had scored seven goals in the Premier League and one in the Champions League this season.


hope he makes it to the world cup deserves to be there ,great player
You must log in or register to reply here.

EFL fixtures for 2020-21 season to be released on Friday