TK Supporter
Amir Khan says a British superfight against bitter rival Kell Brook is an option for later this year.

The former world champion will return to the ring for the first time in almost two years on April 21 at The Echo Arena in Liverpool, with an opponent to be announced next week.

And Khan is now under the same promotional banner as Brook after signing a three-fight deal with Matchroom, making a fight between the pair easier to make.
The 31-year-old plans to come back at welterweight (147 lbs), while Brook recently moved up to super-welterweight (154 lbs), but Khan hinted he may be open to moving up. 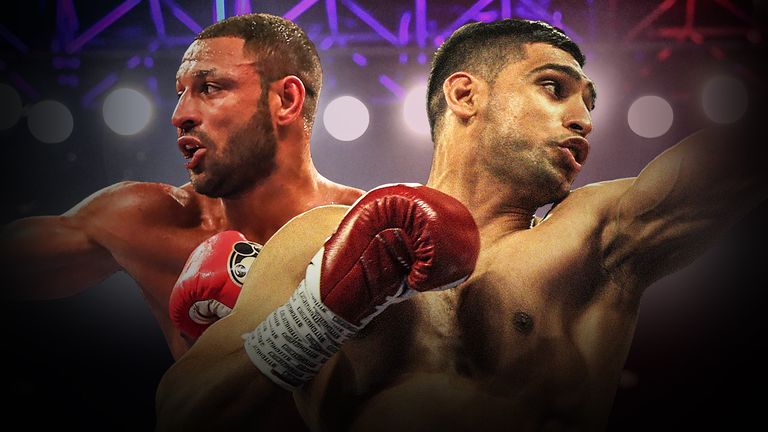 Is 2018 the year Kell Brook and Amir Khan finally settle their longstanding rivalry?

When asked about his plans for 2018, Khan said: "Looking at future fights, maybe someone like Kell Brook. I know he has moved up a weight but maybe that fight could happen later on in the year.

"I need to see what weight I am going to feel comfortable. I am still saying I can make 147 lbs but once I put the muscle on and once I go back into training camp - that is when I will get a better understanding what weight I want to fight at.

Garcia knocked Khan out in the fourth round of their fight in July 2014 to take his WBA (Super) light welterweight title and that is a loss the Bolton native would like the opportunity to avenge, as well as defeats to Breidis Prescott and Lamont Peterson.

Khan said: "Imagine bringing the likes of Prescott, Garcia and Peterson to the UK and having those big fights?

"Garcia and Peterson are both on the same level as me - I am at that world boxing level."

Khan has not fought since a knockout loss to Saul 'Canelo' Alvarez for the WBC middleweight title in May 2016 and has spent time away from boxing, including an appearance on I'm A Celebrity... Get Me Out Of Here!

"I want to still win another world title. I want to come back with a big bang. It has been some time out of the ring," Khan said.

"I was in the jungle for a TV show and that is when I thought 'what do you want in your life?'. I knew I wanted to become a world champion again."
Q

This will a interesting one too! excited all these fights

Sent from my SM-G935F using Tapatalk
You must log in or register to reply here.